RICHEST 1% OF PEOPLE OWN NEARLY HALF OF GLOBAL WEALTH, SAYS REPORT

The richest 1% of the world’s population are getting wealthier, owning more than 48% of global wealth, according to a report published on Tuesday which warned growing inequality could be a trigger for recession.

According to the Credit Suisse global wealth report (pdf), a person needs just $3,650 – including the value of equity in their home – to be among the wealthiest half of world citizens. However, more than $77,000 is required to be a member of the top 10% of global wealth holders, and $798,000 to belong to the top 1%.

“Taken together, the bottom half of the global population own less than 1% of total wealth. In sharp contrast, the richest decile hold 87% of the world’s wealth, and the top percentile alone account for 48.2% of global assets,” said the annual report, now in its fifth year.

The report, which calculates that total global wealth has grown to a new record – $263tn, more than twice the $117tn calculated for 2000 – found that the UK was the only country in the G7 to have recorded rising inequality in the 21st century.

Its findings were seized upon by anti-poverty campaigners Oxfam which published research at the start of the year showing that the richest 85 people across the globe share a combined wealth of £1tn, as much as the poorest 3.5 billion of the world’s population.

“These figures give more evidence that inequality is extreme and growing, and that economic recovery following the financial crisis has been skewed in favour of the wealthiest. In poor countries, rising inequality means the difference between children getting the chance to go to school and sick people getting life saving medicines,” said Oxfam’s head of inequality Emma Seery.

“In the UK, successive governments have failed to get to grips with rising inequality. This report shows that those least able to afford it have paid the price of the financial crisis whilst more wealth has flooded into the coffers of the very richest.”
Advertisement

The $20.1tn rise in global wealth over the past year is the largest recorded since 2007. The total has risen every year since 2008 and is now 20% above its pre-crisis peak, the report said.

Wealth in the US in the past year had grown by as much as the $12.3tn the country lost in the financial crisis.

The Credit Suisse analysts pointed to the debate that has been sparked by work such as that by Thomas Piketty into long-term trends towards inequality. It pointed out that while inequality had increased in many countries outside the G7, within the group of most developed economies it was only in the UK that inequality had risen since the turn of the century.

“Only one of them, the UK, recorded rising inequality over the entire period 2000–2014 and only three show an increase after 2007 – France, Italy and the UK,” the report says.

Of the UK, it says: “Nowadays the pattern of wealth distribution in the UK is very typical for a developed economy. Almost 60% of the population has wealth exceeding $100,000 and there are two million US dollar millionaires”.

Other calculations by the Credit Suisse team “hint at raising global wealth inequality in recent years” and show that overall wealth in the US has grown at a faster pace than incomes. The authors warned it was a trend that could point to recession.

“For more than a century, the wealth income ratio has typically fallen in a narrow interval between 4 and 5. However, the ratio briefly rose above 6 in 1999 during the dotcom bubble and broke that barrier again during 2005–2007. It dropped sharply into the “normal band” following the financial crisis, but the decline has since been reversed, and the ratio is now at a recent record high level of 6.5, matched previously only during the great Depression. This is a worrying signal given that abnormally high wealth income ratios have always signaled recession in the past,” the report said.

China now has more people in the top 10% of global wealth holders than any other country except for the US and Japan, having moved into third place in the rankings by overtaking France, Germany, Italy and the United Kingdom

IS THERE A CASE FOR LE PEN ?

HOW THE GREEK CRISIS IS PROFITABLE FOR THE IMF 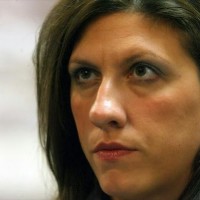 ZOE KONSTANTOPOULOU: «THE GREEK DEBT IS ILLEGAL AND SHOULD NOT BE PAID»